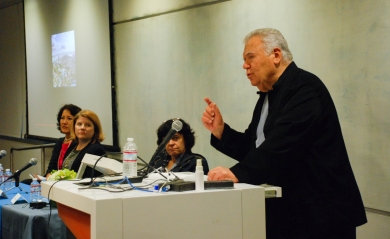 You could feel the collective breath in the room hold for a brief moment as Jaime Lerner leaned in to the podium and began to speak.

In his calm even tone, Lerner the acclaimed architect, urban planner, and former mayor and governor of Curitaba, Brazil and Parana State credited for fathering a type of planning that is utilized by cities worldwide, gave a short presentation that was equal parts inspirational and educational.

At one moment Jaime waxed poetically on the beauty of cities in the lives of people. The next moment he was encouraging the audience of UCLA students from across campus that their ideas are good enough to be executed now. And another moment, in a review of some of the ways he revitalized areas of Curitaba, Brazil when he was mayor, he revealed the innovative mind of one who is far above the norm. It is no wonder he is the recipient of numerous international awards, and the list of his accomplishments – creating a subway system, building a theater in two months, coming up with a solution for city waste to where it achieved the highest rate of garbage separation in the world in 1989, and much more —  make for very chunky sentences.

Such is the heft that Lerner brought to the evening. It explains the enthusiasm with which his appearance on UCLA campus was received. The event on Oct. 28 titled “Urban Acupuncture & Sustainable L.A.” was co-sponsored by Global Public Affairs at UCLA Luskin, the Department of Urban Planning, the Healthy Campus Initiative, the Center for Brazilian Studies, the Lewis Center, and Island Press.

Lerner began his presentation by noting that in order to make a change in a city, there will need to be political will, solidarity, strategy, and good equation of co-responsibility – knowing how to transform a problem into a solution.

When it comes to building smart cities, Lerner said plans need to respect the identity and socio-diversity of the city.

“For me a city is a structure of living, working, moving, and leisure together,” he said. “When we separate urban functions, when we separate people by income, by ages, by religions, every time we want a more human city we’ll need to mix. Mix functions, uses, ages. Then it becomes more human.”

He explained that the city is the family portrait for the inhabitants, and just because one aspect is unseemly, it can’t just be cut off. Urban acupuncture – making focal pinpricks that revitalize cities quickly – help to provide new energy to cities during the long process of city planning.

Lerner encouraged the audience to reinvigorate their cities by putting their ideas into action.

“Innovation is starting,” he said. “If you try to have all the answers, you will never start.”

He added: “If you want creativity, cut one zero from your budget. If you want sustainability, cut two zeros. If you want solidarity, keep your own identity and respect other’s diversity.”

As for how those ideas can be used in Los Angeles, Lerner said his first ation would be to start with simple demonstrative effects – building new transportation lines here and there, giving examples of improvements that citizens can grasp on to.

He noted that local planners and students probably already have great ideas for how to improve Los Angeles, but the question is how to organize the ideas

“First of all, I think it’s important to create a scenario – a broad view of the city that everyone or the large majority understands is desirable,” he said. “If they understand, then they will help you to make it happen. “

Lerner emphasized that communication is key to getting inhabitants of a city on board with a collective vision. He recommended starting by teaching children about their city

“Try to have them design their own city. Then they’ll understand their city and respect it better,” he said, adding that teaching children how to live in a city, such as educating them on how to cross streets safely, are only teaching them the rules of automobiles – not about the city itself.

He repeated again that city planning just need to be about starting.

“Planning is not magic…We have to understand we don’t have all the answers. Planning a city is like a trajectory where you start and then you have to leave some room for people to correct you if you’re not on the right track,” he said.

Panelist Seleta Reynolds, the general manager of the Los Angeles Department of Transportation, noted that Lerner’s concept of urban acupuncture is used in Los Angeles today. In an interview in the Washington Post, Mayor Eric Garcetti referenced the concept when promoting the “Great Streets” program to improve defined areas of Los Angeles.

Though the projects developed for the Great Streets initiative were conceived of my LADOT members, Reynolds noted that Lerner’s planning concepts are “inherent, embedded in a lot of the ideas that flow through the strategic plan.”

When asked about the level of traffic in Los Angeles hampering reliable bus schedules, Reynolds said that buses are hampered when in mixed flow with cars. While it is not a big cost issue to develop bus lanes, it is a design issue that is mired in problems of process, political will, and environmental review, she said.

In the meantime, Reynolds said she expects to see more shared-ride models to be created to provide flexible on-demand transit. However, she said government has a role in making sure there is not too much privatization of public transit.

Paula Daniels, former Senior Advisor to Mayor Antonio Villaraigosa and current senior fellow on Food Systems, Water, and Climate for the Office of Governor Jerry Brown, said delegations of Los Angeles officials visited Curitiba to see how the city had been revitalized.

“The concept of thinking of things more physiologically, which I think originated in Curitiba, is an important design construct. I do see how that pinprick in Curitiba is already radiating in other ways,” she said. She cited the improvements to the city’s storm water system as an example of a system developed from Lerner’s concepts.

Jaime’s TED Talk, “A Song of the City”

Haiti’s Recovery: Don’t Give Them the Fish, Teach Them How to Fish
Scroll to top